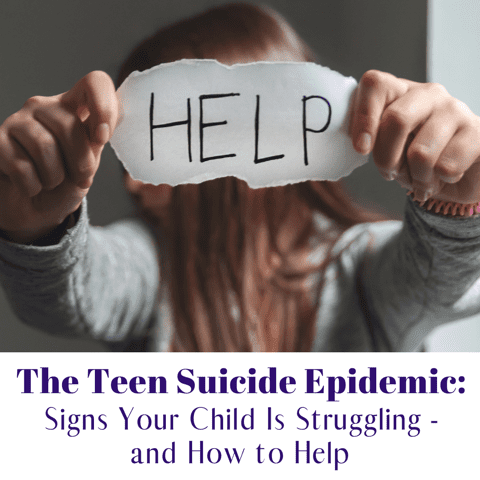 Across the country, teen suicide rates are soaring. In 2021, the CDC has reported that ER visits due to suspected suicide attempts are up over 50 percent in girls. Before the pandemic, depression and anxiety was already at all-time highs, and the isolation of shutdown and the stress of the pandemic has been like lighting a match in a gasoline filled room. So how can you recognize if your child – or one of their friends—is struggling…and what should you do if they are? We spoke to Today Show psychology contributor Dr. Michele Barba, author of Thrivers: The Surprising Reasons That Some Kids Struggle and Others Shine, about this crucial and timely topic.

Can you talk about what you’re seeing – is this the mental health crisis it appears to be?

In your opinion, what is the reason for this rash of suicides?

I don’t think there is one reason; it’s a cumulative effect. The first thing to keep in mind is we can put blame on COVID, but what the pandemic did was simply take the curtain off a major issue. One in five kids was already suffering from a major mental health disorder and now that number is 1 in 3.  The support systems kids used to have, including peers, was gone during the pandemic.  During uncertain times, fear can set in, and then pessimism, and if it’s not talked through, it spirals into hopelessness.  Plus, we as parents are stressed and that is filtering down.

Each child is different – which thing might trigger them? It can be hard to know. But what I was seeing before the pandemic as I was writing my book was affluent kids hit the hardest. Their world is hypercompetitive, and GPAs and test scores are being prioritized over play and socialization. We kept pushing them because we love our children. Girls especially were being affected by social media, especially those without a strong sense of who they are.

What are some of the signs that a teen may be contemplating suicide?

If you’re worried about your child, act on that worry – nobody knows a child better than his Mom. Every kid has a bad day, but are you seeing an unhealthy change last too long?  Is it spilling over into other areas – maybe you see it at home and now your mom friend said your daughter seems different?

It’s also important to watch out for each other. We know that the best source of info is other kids – kids feel safer going to a peer than to a counselor.  I ask them why they don’t go to a counselor, and they’ll say we go to them for our grades and test scores and now don’t want to use them for what we’re feeling.

If you’re looking at extreme mood changes, like anger or a very short fuse, or withdrawal, those are other signs.  Or sleeping or eating changes. And if someone doesn’t want to do something she used to love, and can’t focus at all. These could be other issues, but are certainly red flags. Track these changes and see if they go on.

Who can you turn to for help?

The best person is your pediatrician, because they have a pulse on who will be the best person to refer them to in the area. You’re looking for a network. Start with the pediatrician, and then look to speak with their counselor or school psychologist, or clergy or other people watching out. If you go to the American Psychological Association website you can look for a psychiatrist, but I would always ask your pediatrician first and ask who they would see if their own child was in this situation. Once you have a name, try to feel them out first to see if it’s a fit for your child, and be sure they’re trained in dealing with teens.

Thank you for all of this info! Finally, is there a sign that your teen is really at the end of their rope – and not just at risk, but an attempt is imminent?

Yes, if you find a suicide letter, they are in a dark, dark mood or asking where they can find a gun or other weapon they could hurt themselves with. They may also post something on social media. In that case, you can call the police or go to the ER – it depends on the situation. If you have a gut instinct about something, act on it.

This error message is only visible to WordPress admins

Please go to the Instagram Feed settings page to create a feed.

Stay up-to-date with what is happening in-and-around The Farfax Moms Network community with local events, community highlights, and exclusive deals.